Translation work with undergraduate students is at the heart of the White Rose Project.

Fifteen students from ten colleges took part in the 2018-2019 White Rose Translation Project, which resulted in a new publication: The White Rose: Reading, Writing, Resistance (Oxford: Taylor Institution Library, 2019). The students also contributed to a display, White Rose: Writing and Resistance, in the Proscholium at the Bodleian Library.

Comments from the students:

“As soon as I heard about this project I knew I wanted to be a part of it, not only because of the importance of ensuring that the leaflets are available to readers outside of the German-speaking world, but also because of the new solutions that inevitably arose from having students, rather than experienced translators, working on the project. It was very humbling to be a part of producing these texts, knowing that we were translating the words of people our own age, who campaigned for peace and freedom in incredibly dangerous times, and paid the ultimate price for it.”

“Through the participation in this project, I feel like I was able to approach this part of German history on a more emotional level. I am deeply moved by the thought that Sophie Scholl was the same age as I am now when she made the decision of being part of the resistance against the Nazis – a decision that she paid for with her life. Therefore, I hope that especially students will read these translations and that these translated texts will have a similar effect of bringing this part of German history emotionally closer to them, just as it brought the texts closer to me.”

The students wrote an introduction to their translation of the White Rose pamphlets. Read it here.

Following the success of the project in its first year, we launched a second translation project in September 2019. Again, students applied by submitting a short statement about their motivation and a sample translation. This year’s student translators worked on a selection of excerpts from the letters and diaries of the White Rose members. Many of these texts have never appeared in English before. They speak movingly of courage, conscience, and life under dictatorship. The texts were performed at a concert on 22 February 2020, Voices of the German Resistance. This short film introduces the project and performance. 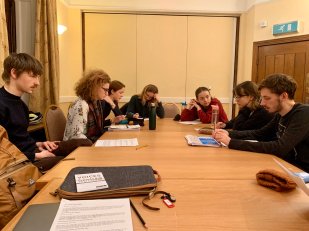 Some of this year’s translators have written short reflections about their experienes working on the project:

The White Rose Translation Project will run again in 2020-21.