We regret to announce that this event has been postponed. We will share details of the new date and venue soon. 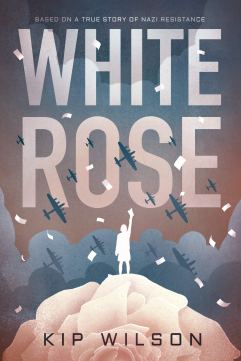 Admission is free, but registration is required: https://www.eventbrite.co.uk/e/reading-and-discussion-with-kip-wilson-tickets-90339270189.

Disillusioned by the propaganda of Nazi Germany, Sophie Scholl, her brother, and his fellow soldiers formed the White Rose, a group that wrote and distributed anonymous letters criticizing the Nazi regime and calling for action from their fellow German citizens. The following year, Sophie and her brother were arrested for treason and interrogated for information about their collaborators. This debut novel recounts the lives of Sophie and her friends and highlights their brave stand against fascism in Nazi Germany.

“White Rose is a resonant testament to courage. In a time of horrific brutality, young people found a nonviolent way to resist. Told in the form of poetry, the story of their hopes is honored and brought back to life, still relevant today, when regimes that spread hatred are once again thriving, and words are our most powerful defensive weapon.” – Margarita Engle, author of Newbery Honoree The Surrender Tree and 2017-2019 Young People’s Poet Laureate.

I hold a Ph.D. in German Literature and have a passion for books, languages, and history. My work has appeared in the Timeless and Spain from a Backpack anthologies, as well as Lunch Ticket, Black Fox Literary, Faces, Cobblestone, Appleseeds, Learning Through History, and Transitions Abroad magazines. My writing has won several awards and honors, and I’m always at work on something new. I’m represented by Roseanne Wells of the Jennifer De Chiara Literary Agency.